The musical journey is marked by firsts: the first completed song, first release, first live show… the firsts keep on coming. So to recognise those personal moments, here’s some recent milestones our fam have hit…

1300 keep notching up the milestones featured on this page. Nominated last year for the 2021 Unearthed J Award they have now have taken out the 2022 J Award for Best Music Video – their DIY homage to the cult film Oldboy. Watch:

It’s the world’s biggest Dj Competition, and Student Atalya Rodriguez aka Rezzx has taken out top spot. She goes hard in the paint, check her winning mix here: 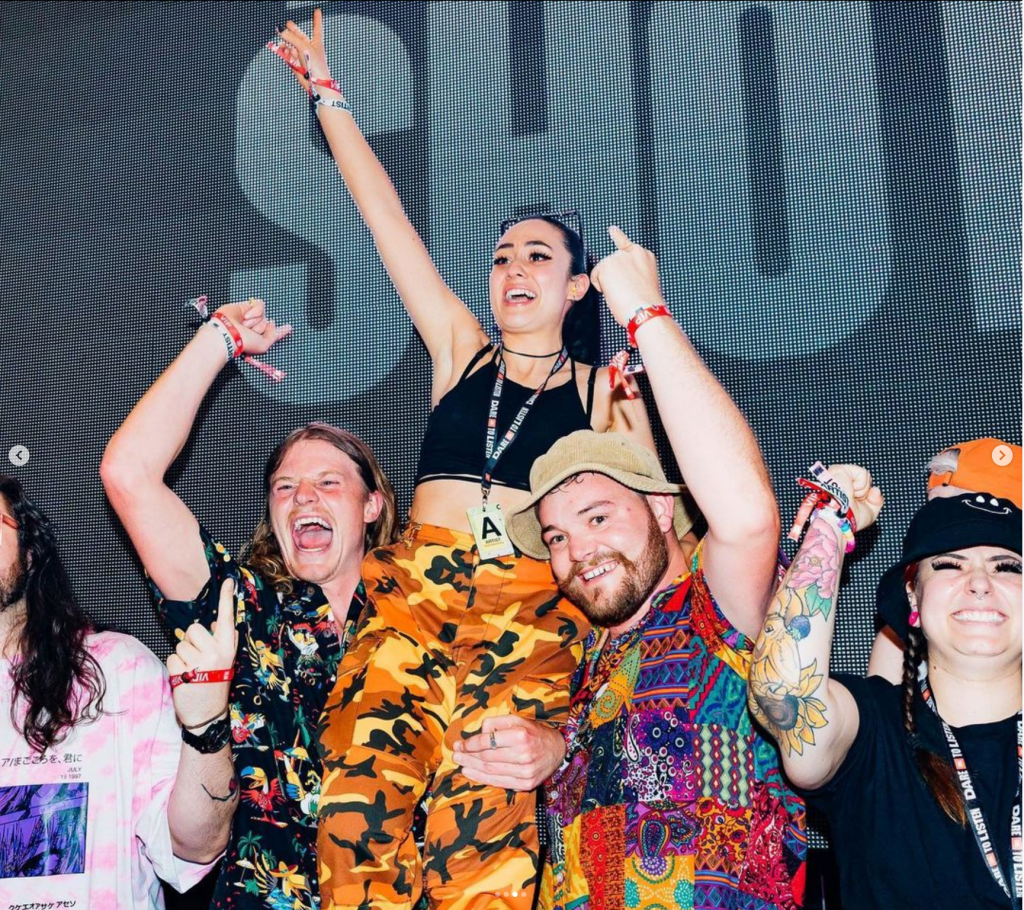 Atalya is actually the second Liveschool student to win the comp – check out Club Angel aka Gabriel Espinosa’s winning mix for 2019 here.

The first gold record you get as a producer, how does that feel?

In his own words, producer Joshua Andersen aka Badrapper says “Dreamt about this since I started making music. Crazy that the first hip hop song I produced went gold. Cheers to @chillinit.420 and the team for having me on. 😁 inside.” 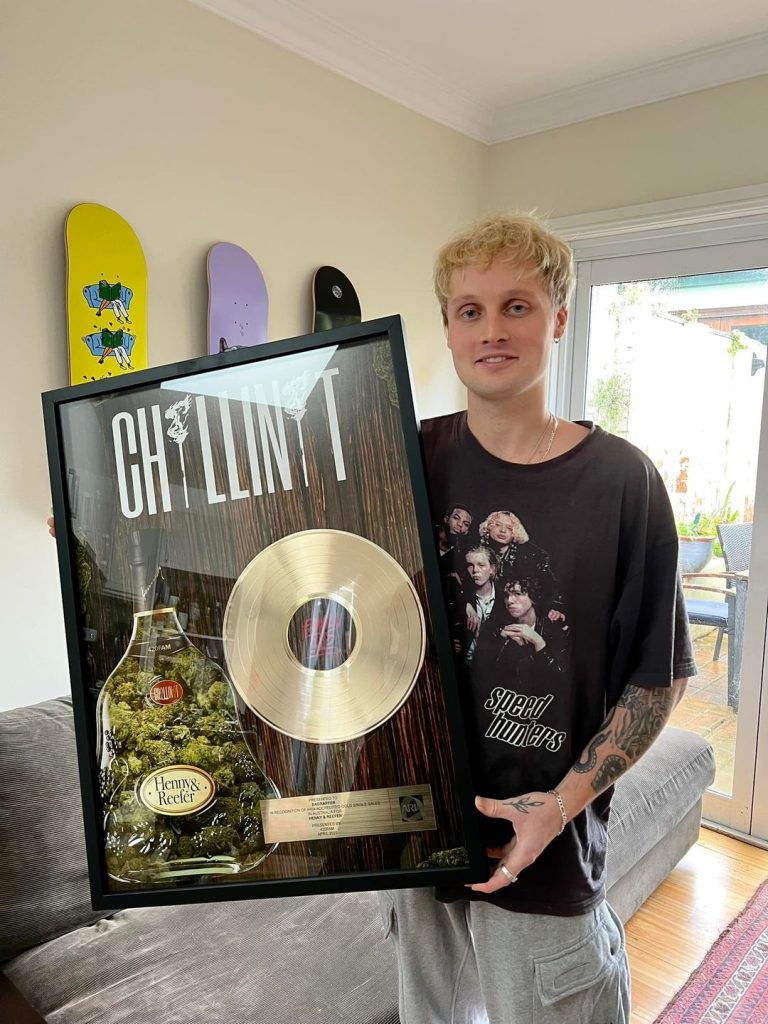 Massive props to Josh – he’s been putting in the yards without pause. Check out his work with Chillinit across multiple tracks including Henny & Reefer – and hear more bass heavy Liveschool graduates via our bass-heavy alumnu releases playlist.

Hugest congrats to graduates Harry Day and Miles Elkington on their win with Middle Kids for Best Rock Album 2021. Incredibly, these legends outpaced category icons AC/DC and Midnight Oil to take out album of the year. The ARIA’s are Australia’s Grammy’s – and while rock isn’t the first genre you associate with Liveschool, you’ll find some of the most interesting producers have eclectic backgrounds and well-rounded careers.

A truly unique sound and style is emerging from this freshly-minted artist and we’re glued to see where Relms leads us next. Self-producing an original style of music is challenging enough, but Relms has proved you can do this while working full-time, studying at Liveschool and raising a family.

Liveschool graduate Mirasia’s first soundtrack is for a project close to her own heart. Artist, producer, DJ, party leader and champion of QTBIPOC and now soundtrack maker for this doco for Pedestrian TV:

After self-releasing their first 2 singles, the next “first” for K-Rap crew 1300 is their 3rd single Smashmouth going out on Nina Las Vegas’ NLV records.

We’re gonna have to pace ourselves on these guys, they’re for sure gonna crack the big-time so expect a lot more “firsts” to come thru…

In her first ever attempt at a remix, Hellogrimbo just took out 3rd place in a remix comp for Kučka!

She hasn’t even finished her Liveschool course and the track is killlller!. Plus she clocked above nearly 500 other entrants. We go into more detail on it and you can hear the remix here.

Out of nowhere, we find that graduate Aimee Green has collaborated with Drum & Bass don (and Liveschool trainer) Royalston. It’s not our first student-trainer release so we can’t claim that. But this is the very first outing for Jaynee!

And the very next week we see she drops her first ever self-produced solo release.

Two debuts! This is our first “double first”!

And even lockdowns didn’t hold them back. The crew at Powerhouse rained down high-tech logistics to pull together this one-of-a-kind virtual show.

As a part of the event prep, Nina gave a breakdown of how the songs were made…

FIRST MUSIC VIDEO // Sir Jude
This is just…. I mean… where to start? A current Liveschool student collaborating with a Liveschool trainer (who themselves was a star graduate) making a crazy good track and a beautifully-produced video. This release is full of personal firsts and personal bests… check it out. Big love and congrats to Juliana Barillaro and Sam Sakr!

Absolute fire. And breaking new ground. 1300 are Sydney’s first K-Rap crew and they’re innovating madly on the genre with wicked flow and great production. “No Caller ID” is their 2nd release and their first music video. Keep these guys in your feed – big things are coming:

Following on from a string of great releases comes our man Warm Ride with his new tune Something. Featuring vocals from Blu3 Boy, Warm Ride doubles down on the soulful lo-fi sounds that have defined his output so far. The video for Something matches the mood perfectly, with two bearded blokes cruising a summer beach scene on motorised Lazy Boy recliners – probably the best way to enjoy Warm Ride’s laid back sound.

Aroha is one of the biggest names in the New Zealand dance music scene, as a DJ she has supported the biggest artists on the planet and hosts prime time radio shows. Recently Aroha has spent more time focussing on her production skills and the result is her debut EP No More Jenga, a heady mix of bass, breaks and house grooves for the dancefloor and you can read more about her first release here.

Recently, two of our favourite artists Touch Sensitive and Setwun took over our Sydney for our first ever Liveschool Twitch stream. In an event we called “Whose Bassline Is It Anyway” the two producers got down and dirty with our collection of vintage synths and outboard gear, combining hardware and software with Ableton Live as the control centre – all while taking input and feedback from the viewers to help steer the direction. Watch the session here and follow our Twitch channel for future events.

Liveschool trainer Doug Wright wears a few musical hats, but it’s his new Ten Brains project that has our attention as a Liveschool First. In partnership with longtime collaborator Russel, Doug’s new project is pushing out further into deep dance territory. With nods to dub technique and techno minimalism Ten Brains is a step further into the wormhole for one of Sydney’s finest producers.

FIRST VINYL // Barney In The Tunnel

Barney In The Tunnel is a collaboration between Sydneys most iconic DJ Barney aka Kato and prolific producer Tunnel Signs. Their debut release has hit all the right notes, with their tune Classic Kickon gaining support from tastemaker DJ Gerd Janson and getting a 12″ release on the German label Cashminus.

It’s been a huge year for both Logic 1000 and trainer Josh aka Setwun which has been reflected in them both receiving nominations in the annual FBI Radio SMAC Awards.  Setwun got the well deserved nod in the “Best Album” category for his Our World LP – a record packed with slick grooves and authentic disco/boogie/funk production. Logic 1000 has rightly received the nomination for Next Big Thing in a year which saw her follow up her massive debut Please Believe Me with several notable releases and the announcement of her own record label!

Gabriel Espinosa first popped up on our Alumni radar when he won the Your Shot DJ competition in 2019. Since then we have kept a close eye on his progress and were thrilled when we came across his debut release. Lovin n Holdin / Silk is a two track release loaded with crunchy UK influenced drum production and an absolutely amazing sound for a producer on debut.

DJ Plead is the moniker of Jared Beeler and a name familiar to fans of underground dance music around the world. The online distributor Boomkat has tapped Plead for an instalment in their Documenting Sound series, a collection of cassette tape mixes by artists at the top of the game in electronic music. Click through for a listen on the Boomkat site.

Former student, and now Liveschool trainer, Nina needs no introduction on this blog. Her Ninajirachi project continues to go from strength to strength with millions of streams and a full touring schedule, but recently Nina has taken a big first step. Her Blumiere EP was the first to feature Nina’s own vocals. The result of her evolution speak for themselves, with Blumiere containing some of her most personal and fully realised work to date.

Liveschool graduate Isabel Stewart has recently released her first self produced track under the name Ella Pho. After generating huge numbers of streams on her debut co-produced tune Fences, we are stoked to see Isabel turning her production skills into a fully realised and self produced track!