Q&A: George Nicholas on mixing Cosmo’s Midnight’s ‘What Comes Next’

A few months back, we spoke to our trainer George Nicholas (Seekae/Cliques) about his work on Winston Surfshirt’s album ‘Sponge Cake’ which has just been certified gold — George has got to be doing something right.

His latest mix project has just been released, Cosmo’s Midnight‘s remarkable debut album What Comes Next. It’s a lively twelve tracks of joyful electronic pop from Sydney producers Cosmo and Pat Liney, which follows in the lineage of Gorillaz’ Demon Days and Mura Masa’s Mura Masa. Liveschool trainer Doug Wright sat down with George to talk about what goes into mixing an album that covers such a broad range of sounds, vocalists, and styles. 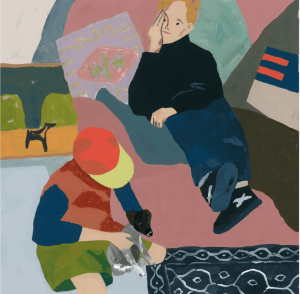 Cosmo’s Midnight – What Comes Next

So it seems like a pretty natural thing for you to be involved the Cosmo’s album considering you’re both working with Astral People, has this project been a long time coming?

Yeah, Tom at Astral sent me some of the early demos earlier this year. Just because I was curious to see what they were working on. Then they asked me to mix it, which was great because I already loved the tracks. And their production was already amazing so it wasn’t much of an uphill battle.

Yeah exactly. The main thing was getting the tracks to sit together well as an album. A bunch of the tracks they had been working on over the course of a few years, so everything comes from a different time and place.

Also the record is stacked with features from different singers and rappers, all recorded with different microphones, under good and bad conditions, so getting a somewhat cohesive sound was the focus.

So how do you do that? As you were working through the tracklist were you referencing tracks against each other?

Not really directly referencing, I guess maybe some it comes more from the processing chains I use, which aren’t always the same, but generally have a constant syntax.

What do you mean by syntax in that sense?

Just like the ordering of the plugins. And the way certain tracks feed into certain busses then into others. Maybe order is a better word, or maybe ‘signal flow’.

Did your process for mixing each track  follow the same pattern? I mean are you always starting on the vocals or something like that?

I’ll usually leave the vocal till last. So I do a rough mix of the instrumental first then add the vocal. I find that if start with the vocal in I’ll just focus on that, so muting it means I can hear all the issues with the instruments without my attention constantly drifting to the vocal. That’s just my way of doing it. Not sure if its the best way but it works ok for me.

Did you have any favourite tracks to work on?

Talk To Me with Tove Stryke was really fun, because she is the incredible. I really like the energy of the track.

I love how the bass and vocals are both right at the front in that one. It’s like you’ve mixed them to have equal importance.

Yeah that was one of the features of a few of the tracks – they had strong low end in both kick and bass and taking away all the sub from either was a compromise, so it was more about controlling the length of the parts so things dont get too boomy.

Actually I feel like how tight and controlled the low frequencies are across all the tracks makes the album feel really cohesive. So this is something that you tried to bring out in the mixing stage?

Haha, could you put that into hours?

I mean it’s something always on my mind. How to get the low end powerful and yet not take up too much headroom.

Could you break down what you mean by that tradeoff between low end and headroom?

It’s always a bit of a balancing act between having a track that has nice full low end and sounds clear and loud. The more low frequencies you allow to pass through, the more you have trouble with clarity and loudness especially on smaller speakers.

For the tracks on this album how long does a mix take you?

It kind of depends… but maybe 2 or 3 days. I’m pretty slow though.

Not slow though right, meticulous?

You work across a bunch of projects, do you think you impart a certain flavour to their sound? Do you think there are any ‘mixed by George’ hallmarks?

Hmm not sure. There must me but I can’t put my finger on what it is. I try sneak at least a little spring reverb into most songs so maybe that’s the unifying feature?

OK one more thing. How do you know when a mix is done?

I think just when I start running out of ideas and trying things just for the sake of it, then deciding it sounded better beforehand. That’s usually a good point to call it a day.

So I guess you stop when you realise you’ve hit the point of the song sounding great, and any changes you make seem to push it in the opposite direction?

Yeah exactly. A great way to ruin a song is overwork it. The more stuff you change, the more you’re moving away from the artist’s vision, which can be a good or bad thing. And also (on a more tech level) the more effects and plugins you add the more you’re distorting the phase and transients of the audio. So I’ll usually export a mix at a few points throughout the mix process, then when I think I’m done, I’ll toggle between all the mixes to make sure the best version of the drums or the vocals or whatever wasn’t actually in an earlier mix.

Listen to Cosmo’s Midnight What Comes Next on Spotify