Workflow improvements are an integral part of an efficient production process. By having some tried and tested processes and templates in place, you can work efficiently on your productions and keep the creativity flowing – rather than getting bogged down in the small stuff. Ableton Ceritified Liveschool trainer George Nicholas is a bit of an expert in this field – the field of getting things done. In five or so years of releasing music, he’s worked on a range of projects – most notably with his acclaimed three piece band Seekae, who have just put the finishing touches on their third full length, due out soon on the Future Classic record label. Outside of Seekae, George has released more dancefloor-centric productions with his duo Cliques and on his own as Hensen. We pulled George away from his busy schedule to get some insight into how he stays productive and the workflows he has in place to do so.

One particular technique George employs is using a well set-up Ableton Live template, which is geared toward common methods and processes used in all his productions.

This pane of Live’s preferences is where you set your default Live Set.

In the picture to the right you can see a screenshot of the File / Folder pane of Live’s preferences pane. To save your current set as your default template, hit the Save button at the very top of this preferences window. This means that any time you open a new session, it will open exactly how this template set is configured – tempo, tracks, effects, instruments, everything!

One technique that George uses consistently in his productions is side-chaining (with the gate, filter and compressor audio effects),  so having this already set-up and ready to go in his template makes bringing side-chained modulation into a tune a really quick and painless process.

“If, like me, you use a lot of side-chain compression/gate/filter in your tracks, it’s a good idea to set up a dedicated side-chain ‘ghost track’ in your Live set. Again, its worth having this set-up saved into your default Live set.

In my default Live set I have a MIDI track with a 909 style Drum Rack on it which is used as my ghost track and is muted by default. In this MIDI track (shown in the screenshot below left), I have a series of midi clips pre-programmed, with a variety of simple kick rhythms in Session View. 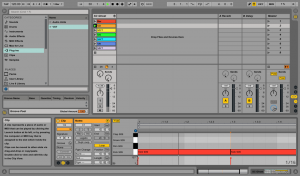 George’s side-cahin “ghost track” which is saved into his default Live set.

The track is called a ‘ghost track’ because we won’t necessarily hear the drum sounds, but those sounds can be routed to into the side-chain input of an effect on any another track, so that the volume envelope of what’s playing on the ghost track then modulates the audio effect.

Having the ghost track in my default Live set makes adding rhythmic modulation to sounds a breeze and means that I don’t have to do any dreaded clip automation or side-chain set-up and ghost track programming in the early stages of making a tune.”

George Nicholas is a member of both Seekae & Cliques, as well as being an Ableton Certified trainer here at Liveschool.