When George Nicholas isn’t teaching the Arrangements and Mixing & Mastering courses at Liveschool, he’s deep in production, songwriting and mixing projects, His CV is growing at a rate that we have trouble keeping up with, and includes diverse acts such as Lucianblomkamp, George Maple, Cloud Control, Polographia, and most recently Winston Surfshirt’s debut album, ‘Sponge Cake’.

We had a yarn to George about his work with Winston Surfshirt, and how he gets in the zone for mixing for someone else’s songs. 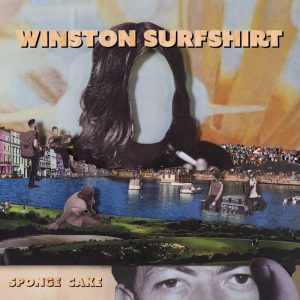 Your own production work as Cliques and Seekae is markedly different to the projects you’ve been mixing recently, do you approach mixing for other projects differently to mixing your own music? Whats similar and what’s different?

Yeah, it’s an entirely different headspace.  When mixing other people’s work I try to be  conscious of the artists intent.  So if an element of the track has a unconventional tone or sits weirdly in the mix, the question is; is it that way because the artist likes it and it gives the track character, or is it a flaw which can be improved. Those sorts of decisions about what to mess with and what not to are probably the most important aspect of the whole process and usually come down to talking with the artist.

On the other-hand if it’s my own music or something I’m producing, I usually have an idea in my head of what it should sound like so don’t have to be as precious.

For the Winston Surfshirt album how were you briefed by the band? Or what did you guys talk about to get on the same page prior to you digging into the tunes?

The first track I mixed was ‘Be About You’, which was the first single and a bit of a trial run.  From that I then went on to mix the rest of the album.

I think for that track Winston and I just had a chat on the phone and talked about what direction I should  take it and then I just did the mix by myself in my studio in Redfern.

Got any examples of track references you were using for this record?

I think I was referencing a few J Dilla records for some of the more bass heavy tracks.  The way the kick and bass (which are often quite subby) work together in a lot of his productions is remarkable.  I was also listening to a bit of Anderson Pak, Michael Nau, Bill Withers, The Beach Boys at the time too.

There’s some real attention to detail given to the vocals on this record, considering they’re playing a couple of different roles in the arrangements of the tracks.  On tracks like ‘Nowhere’ you’ve got the main verses often down the centre, quite dry and upfront, and these wide doubled vocals during choruses.  What sort of processing are you doing to the different vocal parts to get everything to sit together?

Yeah the vocal delivery is pretty different throughout the album, but usually oscillates between single tracked spoken/rapping in the verses and thick layered choruses.  On ‘Nowhere’ the vocals in the verses have only a little verb on them to keep them clear and upfront, but I think I was riding them into a 1/2 note space-echo style delay, to keep them weird and spacey without sacrificing clarity.

In the chorus the vocals open up to this wide reverb-y hook. For that I think I hard panned the backing vocals and made them pretty prominent in the mix but left a main take in centre and left it mostly dry for clarity.  The backing vocals went into a wide slap delay and a plate reverb on returns, which were then really heavily compressed to make the FX sit really forward in the mix.  (I think Dave Fridmann talks about this technique somewhere).

When you’re mixing a whole album, are you using the same or similar processing chains across songs, or is every new mix a blank canvas?

Yeah I’ll try use pretty similar processing throughout to give it consistency – though it’s never exactly the same.  I’ll usually import effects returns from previous sessions and tweak from there.  Also I’ll try work in a sequence so that if I’ve just finished a mix that has, say a hip-hop feel, the track I’ll choose to mix next will have some stylistic similarity to the one I’ve just finished, so that I can try incorporate some of the ideas from the previous mix before I inevitably forget what I did.

Any insider tricks or ideas to think about when trying to get consistency between mixes that are part of a larger project like this?

Using a spectrum analyser can be pretty useful for trying to keep the overall tonal balance between tracks consistent.  I usually use it to see if I’m pushing too much low end into a mix (or not enough).  I have a free FFT analyser app on an iPad which takes line signal from my interface, which is nice because it’s always on.  Otherwise Voxengo SPAN or Ableton spectrum are both great.