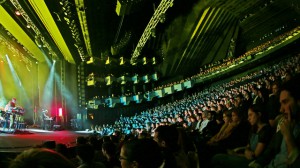 Seekae having been consistently kicking goals since the release of their debut album The Sounds Of Trees Falling On People in 2008. The album was proclaimed by FBI Radio as one of the top ten albums of the decade, and the band has gone on to tour their near infamous live show thoughout Australia and abroad multiple times, release second album +DOME  to wide critical acclaim, and play at Sydneys Opera House alongside an 8 piece string section as part of the Vivid Festival in 2012. We caught up with George, one of our esteemed Trainers here at Liveschool, to get to know more about his production process before he presents at our Input event this Saturday. Edit: This event has now passed, get tickets to our next INPUT: Music Producer’s Conference here.

What are 3 great or interesting tracks you’ve added to your collection in the past month?

What is your usual setup for making music?

From your live setup, what is your most used piece of gear and why?

My APC40.  I have rarely played a live show without it.

What do you mostly work with, Audio or MIDI?

A good combination of both.  I prefer working with audio and by the time I finish a track most of the tracks will be frozen and flattened (audio) so I can cut it, warp it and look at the waveforms.

What are some of your favourite features of Ableton Live?

What drew me to Live in the first place was the session view.  I like the fact that I can just churn out ideas and variations in session view and then select the ones I like when I move into arrange (linear) view.

The EQ Eight.  It’s nice to be able to see the frequencies dancing around.

What’s your most favourite 3rd party plug in and why?

Slate Virtual Tape Machine.  It’s like having a tape machine without having to clean it.

There’s a lot that goes into making music, what part of the process do you enjoy the most?

I think the most rewarding part is playing something you have finished for the first time to an audience. (especially if there is a good response).

What are your usual sound sources in the studio? Synths? Samples?

I think it would be a 3 way split between found sounds, samples from packs and synthesized sounds.  For found sounds I usually just go for a stroll with my Zoom recorder.

What’s your main source of inspiration and how do you stay inspired?

Learn more about our current events.