SoundCloud or Mixcloud – Which is the best site to upload a DJ mix?

SoundCloud once seemed the obvious option to host your DJ mixes, but now Mixcloud has stepped up their game and a lot of people are wondering which is the best site to upload a DJ mix to in 2014? SoundCloud or Mixcloud?  They both have features to consider when choosing which platform will ensure your next mix gets the maximum exposure possible. Here we compare the benefits of each, based on the current feature-set, as of March 2014.

SoundCloud was originally built for artists sharing their original works, but it’s popularity saw it become equally popular for sharing dj mixes and edits. Owners of the original works could always contact the poster and request it to be removed – or contact SoundCloud and make their claim to order a takedown, but the sheer mass of content on SoundCloud meant that such cases were few enough that it wasn’t a major deterrent. In the last few years SoundCloud’s automated anti-piracy filter has meant that users uploading remixes, mixtapes, bootlegs, mashups and re-edits – essentially anything that contains other people’s registered works – have seen their mixes and edits being taken down or (worse) their profile deleted altogether. Some confusion (or claims of unfairness) is caused by the fact that individual copyright owners can still make a claim against your upload (while seemingly missing other sometimes higher-profile – acts who are doing the same) . While this can be frustrating, SoundCloud’s position on what can be uploaded has always been clear: “Uploading copyrighted material is not permitted”. You can read more about SoundCloud’s content identification system and policies on copyrighted material on their blog.

Mixcloud have done an excellent job in creating a site dedicated to hosting long-form audio – radio shows, DJ mixes / mixtapes &  podcasts. Earlier (slightly clunkier) versions of Mixcloud didn’t receive as much uptake by the DJ community but that appears to be changing, with a visible increase in content and traffic lately. This means a greater ability to gain incidental exposure for your mixes on Mixcloud – but there’s still nowhere near the numbers that are on SoundCloud right now. At least, not yet. For example Fools Gold Records’ Mixcloud profile currently only has 1,148 followers compared to their Soundcloud following of almost 3 million. 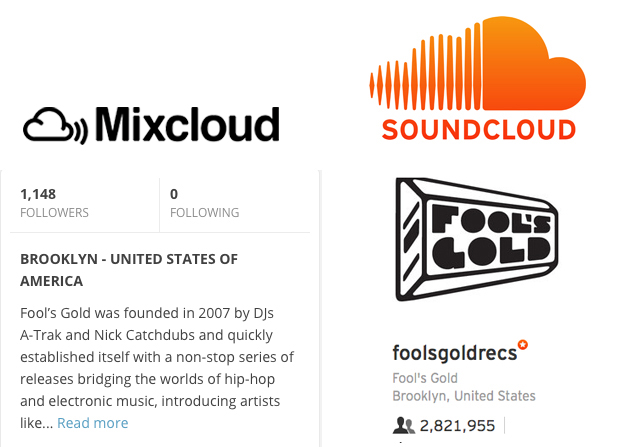 Mixcloud still doesn’t have anywhere near the audience of Soundcloud, as you can see from the extreme contrast between the Fool’s Gold record label’s follower count on both.

Including a tracklist is not compulsory, but submitting a tracklist benefits both the listeners and the artists (that you’ve featured in your mix). Not only does it make artists more discoverable by listeners, there’s also a legal/financial advantage for the artists: tracklists enable Mixcloud to distribute royalties to the featured artists. We haven’t seen any official figures on what these royalties are, and it would be very interesting to see how they stack up against the controversially small figures Spotify reported from Spotify royalty returns.
Not being able to download mixes definitely makes it less convenient for some listeners to really engage with your music, but this limitation is part of what make Mixcloud’s service legal and free for all users – while also ruling out the possibility of any takedown requests. Currently, by offering streaming mixes and podcasts, Mixcloud is classified as on-demand internet radio (like Spotify) – if they were to legally let users download the mixes and podcasts, their licensing agreements with collection societies would need to be very different and they’d potentially need to directly pay artists and labels as well. While SoundCloud allows downloads, this is under the assumption that the music being offered for download is owned and created entirely by the member offering it up (or they have permission from the owner / creator).

So, Which One to Use?

It’s a hard decision, however when it comes to DJ mixes we generally recommend using Mixcloud as your platform, but it’s complicated…

If you are looking for a platform to host your mix so you can send it to specific people or host it for your own audience, then both platforms are viable, however SoundCloud has the extra risk of a take-down of the file or even deletion of your entire account, making it a potentially unstable option.

If you are wanting (or needing) exposure – or simply hope to attract new listeners – then SoundCloud certainly has the larger audience. Further to this, SoundCloud is now a common search term (like Youtube) when people are looking for a song or artist, making discovery all the more possible – but you’re unlikely to show up at the top of a search. The larger audience also brings more competitors, including the original artist who is much more likely to show up in the search results than your yet-to-be-discovered DJ mix. Mixcloud might provide some advantage here, with the “the big fish / small pond” effect – but it’s hard to measure.

In terms of respecting the legal rights of artists Mixcloud will usually be the more appropriate option. We say “usually” here, because this applies to how “most” people create dj mixes – taking their favourite songs and putting them into a mix. But you can still legally and respectfully use SoundCloud if you curate the content with this in mind. You can compile music by producers or bands you know personally, you can get permission from the copyright owners, or you can use material that is listed under Creative Commons instead of Copyright. This SoundCloud article on Creative Commons provides more information on what this means, how it works, and how to find Creative Commons music. Going against anyone’s copyright or ignoring SoundCloud’s policy carries a risk – the effort you spend building a profile and an audience might mean you permanently lose your profile and that connection with your audience altogether. It’s not just having the upload taken down, you can lose your account, your followers – even that handy list of artists you follow yourself. If you’re a producer uploading the occasional dj mix this could be a significant blow.

Financially, though there’s no public information available about what kind of royalties Mixcloud are contributing to artists, but this could also be a factor in your decision – as uploading to Mixcloud provides some financial support to the producer’s and artists responsible for creating the works in your mix. On the financial flip-side, uploading DJ mixes to SoundCloud will cost you once you’ve uploaded over 2hrs of material as you’ll need to take out a paid membership plan, meanwhile Mixcloud is 100% free.

So what is the best practise? Well, one option is to have your tracks on Soundcloud and your mixes on Mixcloud. The issue then is that you’ve split your profile and will be trying to amass followers across both sites. Or you could look at is as a way to establish a foothold in each camp. You can certainly list your other links in your profile description. The remaining unresolved problem for Producers and DJs is that right now it’s unclear what to do with re-edits, unofficial remixes, bootlegs and mashups. SoundCloud or the copyright holders might take them down, and Mixcloud is only for mixes – not single tracks.

Hopefully a clear solution emerges in 2014 as there’s no denying that being able to share these creations has become an integral part of DJ culture and an important tool for producers engaging with their audience. It would certainly seem a step backward for these creations to go back to existing only on the seedier file sharing sites.

If you’ve got any further insights or suggestions, let us know in the comments.