Track Breakdown: Elizabeth Rose on the arrangement of “Another Earth”

In this track breakdown, producer Elizabeth Rose takes us through the arrangement and song structure of her latest single Another Earth, covering the techniques her and co-producer Chrome Sparks employed along the way to make each section of the song hit its mark.

Before we get into breaking down the arrangement, let me quickly explain how the concept, music and lyrics behind my song Another Earth came from.

The Concept and Creative Process behind Another Earth

Another Earth was first conceived after I watched a movie with that exact same name. Regardless of how good/bad the movie was, I was really captivated by the concept behind it – of there being Another Earth, a duplicate planet with our doubles living their lives in parallel on this other planet. I got so inspired that I decided to write some lyrics around this concept. Generally, I find that in cases like this when I’ve got a strong and inspiring concept to work with the lyrics then just flow out of me. In the lyrics I’m contemplating whether to leave this Earth in search for my double life or not – a choice which faced the main protagonist in the film also.

On this track I got to work with Chrome Sparks who I was (and still am!) a huge fan of. This came about from spontaneously tweeting at him about 2 years ago saying that I loved his work and would be keen to work together one day. He responded and said that he was into my music too, which was totally unexpected. Anyway, we didn’t get talking again until a year or so after that when I was heading to New York, around May 2014. We organised to meet up and have a studio session, and from that one session we sketched out the instrumental that ended up becoming Another Earth. From there the song got put on hold again until Chrome Sparks was out in Australia for Splendour last year, then while he was here we had a day together in the studio in Sydney and in that day we finished the instrumental. From there I added the piano, recorded the vocals and polished it up for the release – take a listen below.

Often you’ll see this song structure referred to as A-B-A-B-C-B,

The track does also have a very short 1 bar intro before diving into the first verse of 16 bars, with the vocal coming in straight away with the verse. This means the vocal comes in just 3 seconds into the song. When you’re writing a song that you’re hoping will get on the radio it helps to be aware that for radio the song needs to engage the listener as quickly as possible, so bringing the vocal in fast like this helps make it radio friendly.

Making the chorus sound bigger than the verse was something we were quite aware of while writing the song. Here’s some of the aspects of the writing and production process that really helped make that happen.

First of all, an actual bass line (played on a Moog Voyager) doesn’t make an appearance until the first chorus. In the verse we instead used a lead synth with a reasonable amount of bottom end to substitute for not having any bass line in that section. Holding back the more powerful bass until the chorus not only makes that section sound bigger and more satisfying, it also creates anticipation and tension in the verse – throughout the verse the listener is (consciously or not) anticipating the bigger bottom end they know will delivered in the chorus.

Another thing that makes the chorus feel bigger is the difference in the vocal layering and the vocal register. The melodies in the verses intentionally use a lower register (using mostly lower pitch notes)  in comparison to the chorus, so when it steps into the chorus and moves up to a higher register (using relatively higher pitch notes) it feels more exciting. There’s also a lot of contrast in the vocal layering. In the verse the vocal is double layered and theres a few little vocal harmonies here and there for excitement and variation, but nothing compared to the layering in the chorus. The layering in the chorus consists of 1 vocal lead, 2 vocal doubles, a doubled vocal harmony and then I also sung the lead an octave lower (which is a doubled take too). So there’s 7 vocal layers happening in the chorus altogether, which when all stacked together give the chorus vocal a bigger, fuller and wider sound than the song’s vocal production has in other sections.

Two more things that help heighten the feeling of the chorus in contrast to the verse are the introduction of more percussive elements, which makes the groove stronger and the pace feel a little faster, as well as the synths in the chorus having more high frequency content (compared with the verse synths).

As you can see, getting the chorus to sound bigger often doesn’t come down to a single difference, rather it’s usually a number of smaller considerations and changes (relative to the verse) that sum together to create that feeling of the chorus taking it up a notch from the verse.

For more ideas on making your chorus sound bigger, check out this article that my friend Yama Indra wrote – he goes through a whole list of things that can help.

Creating Contrast in the Bridge

Broadly speaking, the bridge in a song has three main purposes: to contrast against the songs other sections, to give the listener time to reflect on the song so far and to prepare them for (and to build anticipation for) the climax of the song. To achieve all of this in the bridge of Another Earth we made a number of changes and compositional decisions.

Firstly, we removed most of the drums. This slows down the pace and gives the listener a rest, plus it creates anticipation for the drums to return. We also added two new layers in the bridge using Jeremy’s (Chrome Sparks) Moog Voyager. On both of these layers the filter’s cutoff frequency and resonance are slowly increasing, which contributes toward building the tension. The vocal sound in the bridge changes quite dramatically too, to sound smaller and more intimate – it’s more centered in stereo field, less layered, and it’s also got a more lo-fi sound than the other sections which we achieved just by changing the EQ and saturation.

We wanted the final chorus (after the bridge) to feel like the track’s peak, which means it needed to be a little different from the first and second choruses. To create some difference we dropped out all drums and the bass for the first 8 bars of this last chorus, which gets the listener focused just on the synths and the stacked vocals of the chorus hook. Of course this drum-less and bass-less section also builds further on the tension created by the bridge, because the listener is still anticipating the return of the drums and bass line. After the first 8 bars, the drums, bass and other layers of the chorus kick back in, but with some extra added percussion and a vocal ad-lib performance which helps to signify that this is the final peak section of the song.

Want to get a closer look?

Below is a screenshot of my Ableton Live set for Another Earth, in which can see all the arrangement markers along the top mapping out the different sections. For a high-res image with more detail open this link: http://bit.ly/1Sl7ZTk 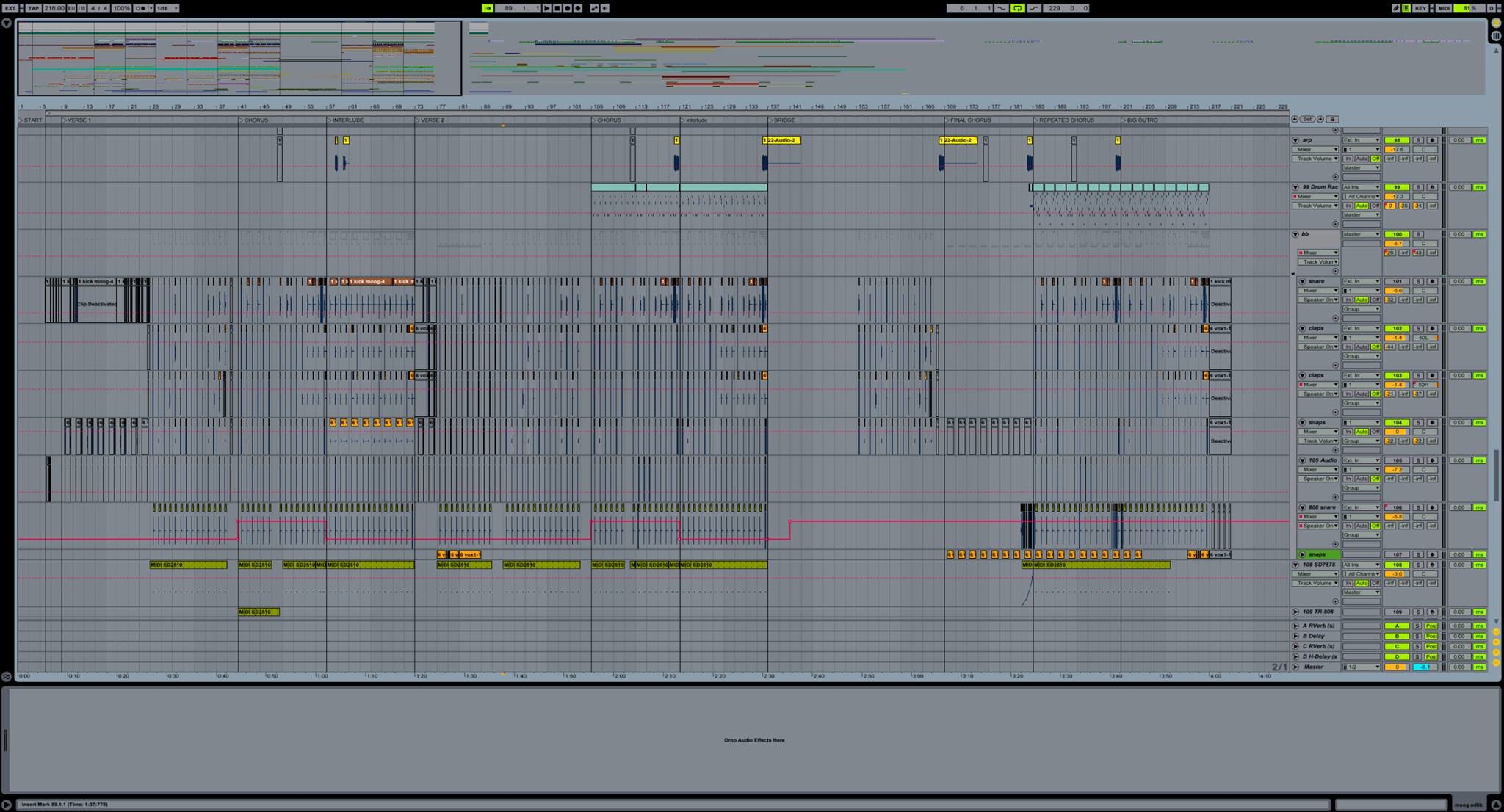