In this interview we talk remix production techniques with Chris Emerson (aka Emoh Instead) who produces with Harley Streten (Flume) as What So Not – a duo discovered and signed by the late great Ajax and whose imminent 2nd EP has now been picked up by Sonny “Skrillex” Moore for his label OWSLA.

Best-known for their distinctive bass-heavy edits and remixes, the pair gained a lot of momentum from a bootleg edit they did of Major Lazer’s Get Free. Basically they did what most of us do – 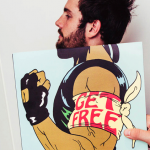 Chris Emerson of What So Not with record that threw them into the limelight.

downloaded it, reworked it in Ableton Live, put it up on Soundcloud. But for these guys the result was a little different… for most people the outcome of a Soundcloud bootleg isn’t having Diplo on the phone wanting to release your version on vinyl as an official remix for his Mad Decent imprint. Remixes quickly followed for Van She as well as Kimbra, A-Trak and Mark Foster and many more – all using the same DIY ethic of ripping up the tracks and re purposing them for big bass-heavy sound systems.

It was this “cut and paste” technique of bootlegging and editing other peoples music that initially drew Chris, already an accomplished dj, towards Ableton Live where he cut his teeth and developed his production style. But its not all reworks – the pair have just released their second EP of original tunes, The Quack (with a feature from Action Bronson on the title track) which follows up their debut EP 7 Dollar Bill. 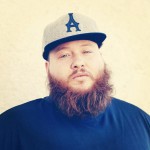 Action Bronson, who features on What So Not’s latest single, The Quack

It was really that first EP of original tunes that paved the way – one of the earliest signings to Sweat It Out, it got support from heavyweights like Switch, Bag Raiders and A-Trak. So while the Major Lazer remix caught the public eye, What So Not were already on the radar for labels Mad Decent and Fools Gold (who also rub shoulders with Skrillex’s OWSLA over on Drip.fm).

Managing such a rise is not without it’s challenges – when he sat down with us at Liveschool studios Chris talked at length about his approaches to staying productive and maintain creativity throughout the work-hard / play-hard schedule of touring. And this will be put to the test over the coming months: with Harley busy taking over the world with his Flume project Chris will be manning the fort, single-handedly touring the show in support of the new release. Hectic schedules aside, the pair still managed a comprehensive Australian tour earlier this year plus squeezed in time to collaborate for the forthcoming EP.

On a technical front, What So Not are candid and generous with sharing their methods of producing, editing and remixing – Chris joined us in a live group-remixing session, reworking Junior Boys as a part of Ableton & Soundcloud’s “Beat the Clock” contest. There, he shared his methods for creating big thumping drums – (Chris is a drummer, turned DJ, turned producer) – including a clever and quick way to assemble multi-layered tracks of drums into one cohesive whole. In this video he reveals some of the structural techniques they use in putting a track together – as well as their love of opening the Track Delay feature in Ableton Live to slightly nudge the timing of each drum layer forwards or backwards in time (by slight degrees) to give the drums a sense of groove.

In addition to Chris sharing his workflows, many of our students have and first-hand instruction in What So Not’s creative processes as Harley taught our “Arrangements, structure & flow” focus-course using Flume and What So Not projects as step-by-step examples of ways to turn ideas into finished tracks – techniques that have proved highly successful across the broad range of genres he produces in. Technical-aspects aside the music speaks for itself and its clear that, while they are already hitting milestones many dream of, What So Not look like they’re only just getting warmed up. This is certainly a space to watch.

Check What So Not’s freshly-minted second EP, “The Quack” plus have a rummage through the Emoh Instead and What So Not soundclouds for some freely-downloadable floor-filling edits.