In The Box: How Mitzi Use Ableton On Stage

Another notch on Future Classics taste-making belt, Brisbane four-piece Mitzi have been taking their glistening brand of garage disco around Australia and the world since the release of their debut EP All I Heard in 2011, right through to their recent debut album ‘Truly Alive’ out now on Future Classic. We had the chance to grill them about their renowned energetic and tight live show. Very much a live band in the traditional sense, Mitzi’s live show also relies on Ableton, MIDI controllers, and a bunch of hardware synths in order to carry across the production-heavy sound of their recordings.

We probably do things a little differently than most, in that we actually use the Arrangement View in Ableton when performing live. It was just more natural to us initially – we’ve thought about changing over to session view multiple times but change is sometimes a scary thing and, hey, no need to fix what isn’t broken. The tracks are set out in no particular order from left to right – we never play them exactly in that order. There is a locator marker at the beginning of each track which our drummer Cale triggers with a MIDI controller.

These locators mark the start of each song in the live set. As they are midi mapped to the drummers midi controller, the drummer can use the mapped controls to  trigger Ableton Live to jump to the song start, much launching a scene in Session View.

We use an RME interface to bring the audio out through 4 separate outputs (Vocal FX, Bass, Synth, Perc). Each song in our live set is broken down into groups to replicate these outputs. By using separate outputs rather than sending it all through a stereo send it makes it easier for front of house to have some control over the mix. It also allows us to be more flexible with our monitoring – for example the Bass track contains a lot of sub booms, which would probably ruin most fold back speakers so we don’t have any of the bass track in our monitoring on stage.

Each song has its own group of clips, which are being sent to their respective outputs on their RME audio interface.

In all songs we use Ableton Live to send MIDI signals to some external pieces of hardware gear. At the moment we are using a Dave Smith Instruments Mopho x4 (a polyphonic analog synthesizer), from which we send a lot of arpeggios and sequences. We also trigger samples on a Roland SP404 sampler, which can then be effected using its internal audio effects engine. This two instruments being controlled by Ableton Live essentially gives us two extra members in the live show – whilst we are busy playing other instruments.

All of the sounds coming out of Ableton Live have been rendered down to audio to save CPU power by not having software synths and audio effects running. We also use Ableton to send out the video for our live visuals and (as aforementioned) MIDI to our hardware synths, so its bearing a fair workload as it is. 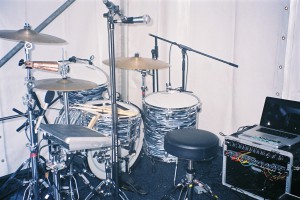 The laptop that runs the Ableton side of Mitzis live show, alongside the MIDI controller their drummer Cale uses to trigger each song (click to enlarge!).

Ableton gives us a lot of freedom when we are performing live – our drummer Cale plays to a click track and the click extends far beyond the standard ending of the song which allows us to do extended versions if the crowd are into it. We also make changes to our live session constantly and we tend to often bridge songs together to keep things interesting. We don’t have the best on stage chat so the less silences the better!

We’ll play one song then pretty much just jam until Cale triggers the next (using the locators shown at the top of this article). As he has a count-in on his click track, Cale will help us rhythmically with a hi hat to ensure we are on tempo (as the next song might have a drastically different tempo) or we’ll do more of a atmospheric sound which isn’t rhythmic to transition into the song. 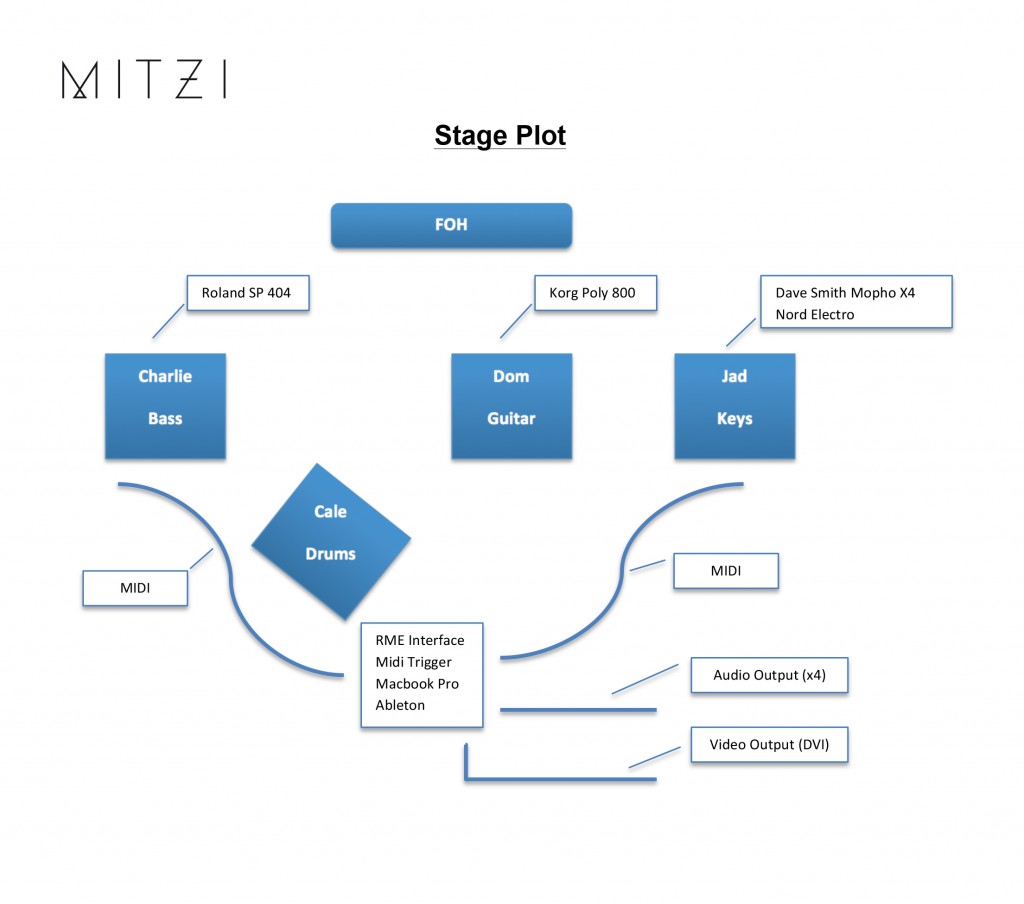 Mitzi’s stage plot, showing where each piece of gear sits and how they are all connected.

Mitzi’s debut album ‘Truly Alive’ is out now on Future Classic records. A big thanks to them for taking the time to walk us through their live setup, if you’ve got any further questions about how to handle Ableton Live for live performance hit us up in the comments or get in contact with us.