We took a Vermona DRM1 MKIII Drum Synthesizer and run through a tasty chain of outboard gear, including a rare (and very valuable) Fairchild 670 compressor. The resulting samples are filled with character.

Get the sample pack at our shop:

The Vermona DRM1 MkIII is a true analog drum synthesiser that went into production in the early 2000’s. Much more a drum synthesiser than drum machine, the DRM1 features 8 “sounds” to work with: some tailored to achieve dedicated kick, snare, hats and so on, and others like the Multi which is, in essence, a three oscillator synth in itself and can pull some pretty crazy sounds. Overall the Vermona has some very snappy envelopes, unique parameter dials per sound, and a good deal of punch. 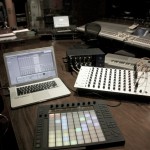 Using the per-sound outputs on the Vermona, each sample was passed through a series of outboard gear suited to that sound. 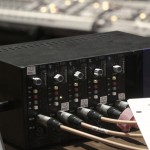 For example, a couple of the snare samples were recorded from the Vermona straight into an API 512c Lunchbox preamp, EQ’d with a Pultec EQP1A and then compressed with the Neve 2254, captured back into Ableton Live with an Apogee Rosetta 200. One of the Cowbell samples? Straight into the API 512c Lunchbox preamp, run through a channel of the SSL9000k console for some slight compression and EQ, then further EQ’d with the Pultec EQP1A and compressed with a Focusrite Red.  Phew!

For the full nerds out there we’ve listed the full chain of each sound inside the sample download pack.

There are 2 Drum Racks  – one with subtle settings and one with tougher settings. They both have macros so you can reshape the sounds to your liking. Each sound has 8 controls pre-assigned for swapping samples and customising that sound.